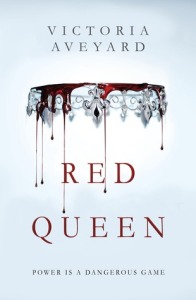 RED QUEEN (RED QUEEN TRILOGY #1) by Victoria Aveyard
Release Date: February 10, 2015
Publisher: Orion
Young Adult
Summary: The poverty stricken Reds are commoners, living under the rule of the Silvers, elite warriors with god-like powers. To Mare Barrow, a 17-year-old Red girl from The Stilts, it looks like nothing will ever change. Mare finds herself working in the Silver Palace, at the centre of those she hates the most. She quickly discovers that, despite her red blood, she possesses a deadly power of her own. One that threatens to destroy Silver control. But power is a dangerous game. And in this world divided by blood, who will win?
Every year there’s a book billed as the next big thing in YA, and by George this one might be it. To put it simply, Victoria Aveyard’s RED QUEEN, on top of being well written, is egregiously fun, and really, that’s all I want in a high fantasy epic like this.
I could stop the review there, but let’s keep going. Honestly, I am a fantasy geek. I was born and bred on a steady diet of Japanese RPGs like CHRONO TRIGGER, SECRET OF MANA or FINAL FANTASY, STAR WARS movies, BUFFY THE VAMPIRE SLAYER, etc. I grew up loving the grand fantasy epic, the kind that involved special young people with powers, immersive fantasy worlds, grand adventures, and intriguing characters you wish you could meet (or snog) and this is what Aveyard serves in this fantastic debut.RED QUEEN’s premise is one that feels more akin to the dystopian genre than fantasy. You’ve got a society divided by the color of the one’s blood: reds, the oppressed underclass, toil away in the dregs of their monarchal society while silvers, the privileged oppressors, enjoy a life of luxury. I know a lot of particularly well-read YA readers might hesitate approaching a book whose premise feels somewhat well-trodden, but don’t let these surface details stop you from the experience of reading this book. Once you start reading, Aveyard pulls you relentlessly into her richly imagined setting. Fantastic world building and complex character development adds depth and layer to protagonist Mare Barrow’s world. It is utterly immersive and seamless, which is key to grand fantasy epics such as this.

The epicness of the plot comes firmly from the enticing intrigue of court life. As Mare finds herself entangled in the dark, political mystery shadowing the luxury of the Silver Palace, the reader too is dragged into what is essentially a very gritty game of power, revolution and betrayal. The book’s colorful and complex cast of characters, by being so relatable and easy to love, raise the stakes that much higher. Who do you root for? The story never lets you get comfortable and I love that.

I will say that the romance, for me, wasn’t as strong as the other elements. Though I loved Mare, loved her struggle, loved her humanity, her strength and weakness, I wasn’t quite sold on her love triangle with sexy suitor princes Cal and Maven, as complex as their relationship was. At the same time, because the story itself was so much grander than the romantic subplot, it was easy to set this aside in favor of concentrating on the epic tale Aveyard weaved so expertly.

Fans of GAME OF THRONES, REIGN, or THE BORGIAS will love this immersive, fast-paced dystopian fantasy. When you step into a fantasy world, you want high concept, you want high stakes, great characters, grand everything. You don’t want to read the book – you want to take a vacation in the book. RED QUEEN gives you exactly that. Dig in, fantasy lovers!