Hope everyone had (or is having!) a good long weekend!

Remember, SIEGE OF SHADOWS is available for pre-order now! 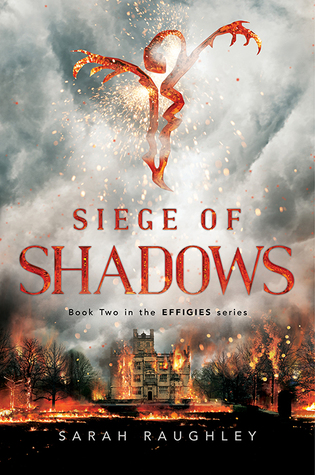 Not when you’re an Effigy. No matter where they go, Maia and the other Effigies can’t escape the eyes of the press—especially not after failing to capture Saul, whose power to control the monstrous Phantoms has left the world in a state of panic. It’s been two months since Saul’s disappearance, and there’s still no sign of him, leaving the public to wonder whether the Sect—and the Effigies—are capable of protecting anyone.

When Saul suddenly surfaces in the middle of the Sahara desert, the Sect sends Maia and her friends out after him. But instead of Saul, they discover a dying soldier engineered with Effigy-like abilities. Even worse, there may be more soldiers like him out there, and it looks like the Effigies are their prime targets.

Yet the looming danger of Saul and this mysterious new army doesn’t overshadow Maia’s fear of the Sect, who ordered the death of the previous Fire Effigy, Natalya. With enemies on all sides and the world turning against them, the Effigies have to put their trust in each other—easier said than done when secrets threaten to tear them apart.

So you ready? Here’s an excerpt from Effigies Book #2: SIEGE OF SHADOWS!

“You’re going to be okay, though, right, Lake?” I asked her.

I hesitated too. The past few weeks had been a learning experience for the both of us. We were both stronger now, but we’d always been paired with one of the other girls if we weren’t fighting in a group. This would be a test for both of us.

“We can do it,” I said, and despite the painful pounding in my chest, I think I actually believed it. “Yeah. We can. You, me. All four of us. We can do this.”

Lake’s gaze drifted to the window. “Sure about that? It’s looking pretty bad out there.”

We were a team now.

Lake seemed a little taken aback, but she gave me a resolute nod nonetheless.

“At least let’s try not to die,” I added with a half smile.

One minute to the drop site. It was go time.

“Remember,” Sibyl said. “You have to activate the three APDs at the same time. We haven’t found any evidence of other human hostiles in the area, but stay on your guard. Gather up whatever information you can, then give the signal for retrieval.”

Belle. She’d been so silent this entire time I’d almost forgotten about her, but she was in her own chopper, listening, quietly preparing. Her voice had the serenity expected of an Effigy who’d been handling suicide missions since childhood.

How I wished, as I wiped my sweaty palms on my fatigues, that I could have siphoned even a tenth of that confidence. But I’d spent the last two months away from home training for situations like this. I couldn’t wuss out now.

Lake and I nodded at each other. Twenty seconds. Ten seconds. The hatch opened.

At Sibyl’s word, I leapt out of the helicopter. The long snouts of serpent-like beasts snapped in my direction, baring their ivory teeth. Dark smoke sizzled off their black, rotting hides, their ghost eyes shining against the dimming light of the darkening sunset. They knew us intuitively. Effigies, creatures of magic like them.

But we were their enemy.

They launched at us, but the helicopter’s EMA did its job. The Sect’s protective electromagnetic armor was top-grade, stronger than what even rich people could afford for their cars and yachts. The field stretching out from the helicopter’s armor had a wide enough circumference to keep us momentarily safe from the phantoms even as we descended, but I knew that if they didn’t tear us apart, the desert winds would. The wind whipped past my skin, battering against my goggles, tossing my clothes and my thick, curly hair relentlessly. The force was so great, it was all I could do to keep my lips pressed against the onslaught.

A few seconds of falling and I could already start to see the Sahara desert below.

We did. The upward force hoisted me up with a jerk so violent I thought I would snap in two. The wind was too gusty for an easy descent. I could feel it veering me sideways.

Through my goggles, I could see Lake’s arms raised in front of her, her long, thin legs kicking in the air. I could almost imagine her closing her eyes, her breath straining under the pressure of maintaining the delicate balance needed to control her element.

The words Lake always used whenever she trained me in elemental control. For Lake, it came naturally, but controlling a torrent like this over such a wide area would be difficult even for her.

She did the job; the air around me calmed and I could breathe normally again. But I knew it was only a moment of respite. Even with the darkening sunset reflecting off my goggles, I could see them through the glare: the phantoms twitching and twisting in the desert wind, their long, serpent-like tails floating behind them. Waiting. The helicopter’s EMA had good reach, but soon we wouldn’t be able to rely on it anymore. The second we were out of this protective bubble, we’d be on our own. Survive or get eaten.

Eventually, a male voice from Communications confirmed what I knew and dreaded. “Thirty seconds until the subjects leave the EMA circumference.”

“You’re close enough to the ground for a safe fall,” said Sibyl, “but you’ll need to detach your parachutes immediately once you’re out of the safety zone.”

The horrible minutes between now and the time we set up our APDs would be a free-for-all. We’d have to be fast.

We’d have to fight.

And don’t forget I’M GIVING AWAY ONE ARC OF SIEGE OF SHADOWS!! That’s one advanced reader copy of Siege of Shadows. Click for details!